Said to have originated with a bored lad with questionable football skills, the VCC was created to give the lad, and his friends, an alternative and more constructive way of passing the time.  The formation of the RNVCC was very much based upon the successful unit already established by the Royal Marines Artillery in Eastney.

The first RNVCC unit was formed in 1904 at what was then called HMS Victory Barracks in Portsmouth, now known as HMS Nelson.  Soon other units opened and at its height, the RNVCC had units in:

As the Royal Navy estate decreased over the latter 20th Century so did the RNVCC, although today it boasts active and growing units in HMS Collingwood, HMS Excellent and HMS Sultan.  Originally only open to boys of serving sailors, the RNVCC was aligned with the Royal Marines Artillery and Royal Marines Light Infantry Cadet Corps as the Volunteer Cadet Corps, and was subsequently open to boys from all three services and then to boys and girls from each establishment’s local civilian community.

Unlike the Sea Cadet Corps, who obtained Admiralty recognition in 1919, the RNVCC has always been ‘part of the Royal Navy’ and whilst having the same general aims as the SCC has been supported and managed by the Naval Service in a different way usually with larger number of cadets in each unit, thus retaining its own identity and command. 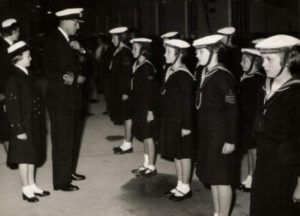